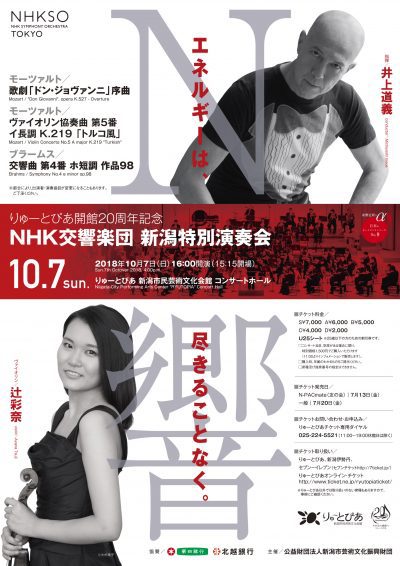 On the next morning of a concert I had conducted Mahler’s 8th symphony, I had a rehearsal at 10 a.m. with the NHK Symphony Orchestra (NSO) for concerts in Saitama and Niigata. The main program was Brahms’ 4th symphony, the very core of the European music repertory. The first half of the program consisted of “Don Giovanni” overture and a concerto by Mozart with Ayana Tsuji, a rising twenty-year-old violinist. I had performed a Sibelius’ concerto with her before, but she was better at Mozart. I think it’s good for musicians to be suited for Mozart.

I had a tough game during the dress rehearsal at the Saitama Arts Theater Concert Hall. I could hardly hear the soloist playing!! As for Brahms’ symphony, I also couldn’t hear the sound we had shaped just so, at the NSO’s studio in Isarago! While conducting the dress rehearsal, I kept asking myself “why, why isn’t it going well?”… From the second movement, the balance of that thick, romantic texture of horns and wood winds was lost. The eight contrabasses had virtually no sound for me… I had to stop the rehearsal to try to change the platforms on stage, the horn section’s place, etc…

The cause, actually, was that the hall had been furnished with brand-new seats recently during its renovation. For this reason, the acoustics of the empty hall without audience were “dry”, much like the Kyoto Kaikan hall in the past. Additionally, there was an acoustical saturation whirling on stage. (I started to notice this problem a bit during the latter half of the rehearsal.)

My expectation had come true. When the audience entered to be seated, their bodies served as sounding board. As a result, the sound was greatly improved at the concert! We could thus imbue our performance with a wonderful sense of unity. This experience proves typically that music is something to be created with audience.

The NSO of a generation ago would have reacted against this kind of trial and error during the rehearsal, saying “This is none of your business, don't rock the boat!” But this time all the musicians were keen to resolve the problem, which raised my motivation.

An orchestra must be always one step ahead of the contemporary society. According to the former concert master of the Vienna Philharmonic Orchestra Mr. Rainer Küchl, who led the NSO as a guest concert master this time, the Vienna Philharmonic Orchestra had been composed exclusively of Viennese thirty years ago. But today, the members come from diverse areas and countries, especially from Eastern Europe. And some women joined the orchestra, too. Things have been changing in both good and bad ways…

As for the bad ways, the orchestra’s members of years ago were not open to anything unknown to them, and their music making was, if anything, kind of rustic.
And needless to say, the best point of the orchestra in the past was that Viennese savoriness. Even though it was a purely male group, the sound was voluptuous. Furthermore, the ensemble’s ability improved by performing operas, which brought about their tradition and vivid individuality where principal players exhibit strong leadership in performance. The Musikverein hall also greatly built on these strengths.

And now, turning to the NSO which has to keep being the best orchestra in the Tokyo area, even if they had a few foreign players in the past, nearly all the members of the orchestra of today are Japanese. As Mr. Küchl praises, the NSO can perform “anything” well in terms of both technique and musicality. Of course, that’s a good thing, as it shows they are an “orchestra of today” required to play any repertoire well. But only when it comes to facing a music based on very German expressions, the rugged character the NSO had before has been rarefied, I feel.

However, we shouldn’t care about such things! I don’t mean at all I miss the NSO of the old days! Because what people expect of today’s orchestras is, in reality, a flexible attitude in a deeper sense. The Japanese traditional musical drama called Noh for example, has different styles that were developed by various regions under local lords of the past. With time, this system has been weakened until today, and now, a lot of styles are jumbled. In this situation, the Noh artists of our time keep only the old way of performing, only the form, tackling many different styles. That’s exactly the same situation as modern orchestras’, I suppose…

Of course, the majority of people both in the Noh world and the orchestral world are not so negative. Almost every artist is positive. But at the same time, they are human beings. Right and wrong live together in a human, like the sonata form having two opposite themes. Humans can be weak and often bend to a more comfortable environment. A true conductor always has to combat such an “atmosphere”, even to the one inside himself.

The 4th symphony of Brahms isn’t concluded in a major key. There’s no solution. His mental conflict is projected onto this music just as it is, and the finale finishes like a gravestone standing there without moving. I’m probably attracted the most by this type of music, especially in the classical world with a lot of pieces where everything ends as if it was predetermined to…

The concert at the Ryutopia hall in Niigata was to mark the hall’s 20th anniversary. The tickets were completely sold out. The NSO which just celebrated its 92nd anniversary last October (since it was founded as professional group under its former name, “New Symphony Orchestra”) performed joyfully in this hall with great acoustics.
As an encore piece, we played “Pizzicato Polka”. Pizz-pizz, pizz-pizz, tick-tick tick-tick!…that’s how the time passes. 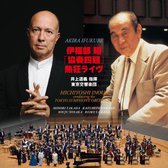